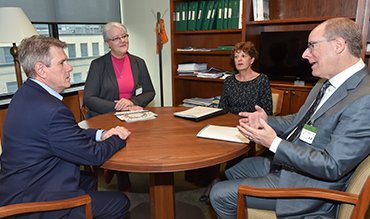 TORONTO, ON – On Thursday May 4, 2018, members of the Direct Sellers Association of Canada (DSA) gathered in Ottawa for their annual Lobby Day, with a focus on NAFTA negotiations and ensuring a fair outcome for Canadian entrepreneurs.

During the course of the latest round of NAFTA negotiations, the issue of raising the de minimis threshold (DMT) has been brought up as a potential negotiation bargaining chip for Canada. The DSA and its members met with more than 15 elected officials on Thursday to caution that raising the DMT from its current $20 level would be detrimental to the direct selling industry and the Canadian economy.

“Increasing the de minimis threshold will give an unfair tax advantage to foreign online retailers” said Peter Maddox, DSA President. “This would put Canadian direct selling companies at a disadvantage in comparison with foreign sellers, as they will still have to charge a sales tax while foreign sellers would be exempted.”

Other issues discussed during the DSA’s meetings included providing a fair regulatory playing-field in support of direct selling’s growth and promoting the important economic impact the direct selling industry has on the Canadian economy, particularly for women and rural Canadians.

Over its sixty-four-year history, the DSA has placed a focus on meeting with elected officials, at events such as the Ottawa Lobby Day. “Days like these are important” said DSA Chair Tracie Graham, “they help support future collaboration and lead to year-round opportunities to engage and consult on a range of important topics.”

As the national trade association for the leading firms that manufacture and distribute goods directly to consumers, the mission of the Direct Sellers Association of Canada is to promote, serve and protect the interests of Canadian member companies and independent direct sellers marketing their products, and ensure the highest level of business ethics and service to consumers.

Direct selling companies in Canada represent over 1.2 million Canadians who are involved in Direct Selling (82% are women) generating over $2.5 billion per year in sales.

The cornerstone of the Association’s commitment to ethical business practices and consumer service is its Code of Ethics and Business Practices. Every member company pledges to abide by the Code’s standards and procedures as a condition of admission and continuing membership in the Association.