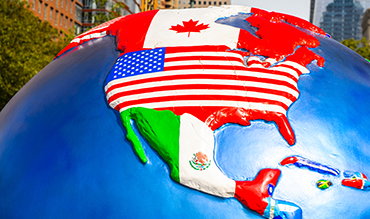 Date: 16 Nov, 2018
DSA Canada is pleased to report that, after significant advocacy, a reference to direct selling has been included in the revised North American Free Trade Agreement (NAFTA). Pending legislative approval, the revised deal will be known as the United States-Mexico-Canada Agreement (USMCA). The direct selling reference appears in the chapter on Cross-Border Trade in Services Chapter, Article 15.10, in the section on small and medium sized enterprises. It states that business models, such as direct selling services, should be supported.
A foot note to the reference defines direct selling as follows:
Direct selling is the retail distribution of goods by an independent sales representative, and for which the representative is compensated based exclusively on the value of goods sold either by the representative or additional representatives recruited, trained, or otherwise supported by the representative. Such goods include any product that may be distributed by other retail distribution service suppliers without a prescription or other special authorization, and may include:
The term “nutritional supplement” applies to all health-maintenance products not intended to cure or treat a disease, and that are sold without prescription or other special authorization.
The above text represents the language agreed upon by representatives of the three DSAs involved in the trade agreement region and promoted by our industry for inclusion in this and other international trade agreements. A link to Chapter 15 of USMCA can be found here.
The inclusion of this text represents a milestone for direct sellers. Recognition in a trade agreement of not only the legitimacy of the business model, but support for its promotion as a way to stimulate economic growth, is a welcome development, for which the industry worked with commitment and cooperation.