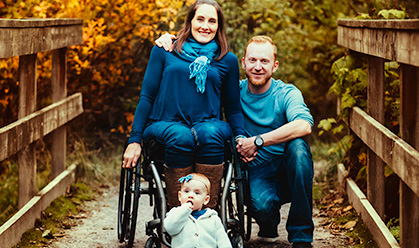 Congratulations to Independent Sales Director, Kristen McBride of Mary Kay Cosmetics, for being one of our Mark of Distinction Award winners.

This award recognizes an independent salesperson (or team) who upholds the values of trust and integrity, which are so vital to the direct selling industry, as well as being a leader who inspires others to achieve their utmost potential.

Involved in a car accident at the age of 20, which left her a quadriplegic, Kristen’s can-do attitude is an inspiration to her team and embodies the principles of Mary Kay’s founder. Starting out as a customer and moving into the role of Sales Director, she has developed a strong customer base and has consistently ranked in the Top Ten of Personal Sales.

Admired by her customers, team and other leaders in Canada, Kristen has inspired countless members of the sales force through her determination, positive attitude and leadership. Mary Kay is now her full-time career and one that she continues to thrive in and be successful at.

Lynda Rose, General Manager for Mary Kay Cosmetics says, “Kristen leads her team with integrity, honesty and example.  Holding weekly meetings and events, she has capitalized on technology and her interpersonal skills to lead an organization of successful women just like her.”

“Kristen’s story is inspiring and she is a worthy winner of this prestigious award,” says Peter Maddox, President of the DSA. “I hope that recognition such as this is fuel for Kristen’s continued success and that others are encouraged to follow in her footsteps.”

Visit our Awards page for more information on each award winner.